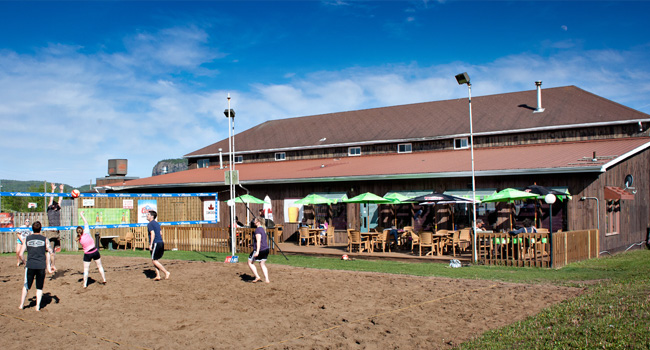 “NEEBING” is the Ojibway Indian word for “MEETING PLACE”. “ROADHOUSE” is a good eating house or tavern on a “COUNTRY ROAD”.

“The Neebing Tourist Hotel” was constructed in 1947 and for the first number of years, it was considered a goodly distance from the city. Over the years, it has been a welcome meeting place for rural folk and a pleasant escape for city folk.

“The Neebing” was almost destroyed by fire in December 1982. The reconstruction was completed and the “Neebing Roaadhouse” was reopened on February 8th, 1984. The popularity of the “NEEBING” as a place of enjoyable dining necessitated an expansion in the fall of 1987. The design and atmosphere has been achieved from the friendship and inspiration of Bill Antonyshyn. To the man they called “Nish”, cedar, curves, stained glass, creativity, warmth and friendship were his calling card. This expansion is dedicated to his memory.

The Totem Pole that once graced the entrance was added to the Neebing in the fall of 1985. The pole stood over 25 ft. and was carved from an 800 lb. B.C. cedar log. It was created by Chief Kitpou “Shaman Chief of the Children of the Light”. Chief Kitpou, 74 years old at the time, was the hereditary chief of the Algonquin Nations. The pole had 4 characters. The eagle at the top represented the overseer of the forest and with its wings in the raised position indicated its protectiveness. The bear represented the strength of the forest. The raven is the prodigal sun. The bottom figure was the grandfather, representing wisdom and stability.

Our menu has been designed in the tradition of the “Neebing Roadhouse” with the anticipation of your enjoyment in our unique country vogue atmosphere.

Sorry, no Tweets were found.